Greg: Can you tell me about when you got in trouble with the police?

Dan: I had just gotten back from my friend's place in eastern Washington, and I had tossed my pager and my cell phone out the window into the woods, because the Secret Service had already interviewed me. 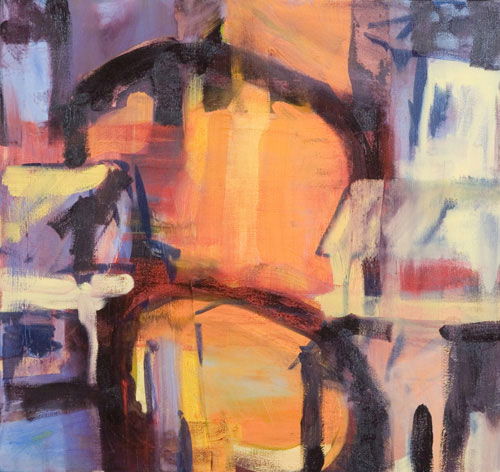 Greg: For real? Or you were paranoid?

Dan: Because of certain offhand comments I had made, in my manic-ness, at a city council meeting, so I figured my cell phone was bugged and I tossed it, meaning I couldn’t call my roommates and let them know I was coming home... because I had kind of disappeared mysteriously in the first place, so when I showed up at the house all of a sudden, my roommates didn’t have a lot of time to think it over, because I guess they had talked to my ex-girlfriend and she had said to call the hospital or whatever as soon as they found me, and they had recommended to bring these social workers or psychiatrists over, so as soon as they saw I was back, they called these mental health professionals. And I came upstairs and I had this really cool cross with a pewter Jesus on it, and I was carrying it around because I thought it was some kind of protection. I remember walking into the living room and I was like, “DON'T WORRY ABOUT ME... I’m just carrying this for protection!” [Laughs] And my friends came out and they were asking me if I wanted to go to the hospital, and I was like, “Yeah I guess...” and then suddenly this big cop comes around the corner and my roommates were totally pissed because they had told the cops not to get involved because they knew I was totally paranoid at that point.

Greg: Why were the cops even involved in the first place?

Dan: Because they thought I was dangerous... because somehow they had gotten wind that there was some nut running around. So I just ran down to my room and I was like, “Fuck you!” and barricaded myself in my room. And every once in a while I’d sneak over to the bottom of the stairs and I could hear them talking about me up there. I’d be like, “I CAN HEAR YOU TALKING ABOUT ME YOU DUMB FUCKERS!!” And slowly more and more cops were showing up... because they were like, “YEAH, SOME CRAZY MOTHERFUCKER’S DOWN THERE LET’S GO KICK HIS ASS.” [Laughs]

And it just got totally out of hand. There were like 12 cops outside my room, and I just kept yelling, “YOU GUYS ARE SO STUPID... YOU GUYS DON’T EVEN KNOW WHAT THE FUCK YOU’RE DOING, DO YOU?" and, “IF YOU GUYS TRY TO COME IN HERE I’LL KILL MYSELF!” And they were like, “What are you going to kill yourself with?” And I was like, “You know as well as I do, I can kill myself with anything!" And they were like, “Alright, dude... ” And I looked around all my windows and I was like, “Don’t even think about throwing tear gas through those fucking windows or I’ll fucking kill myself!”... you know. [Laughs]... And there was one cop who had been nice to me, and I was like, “One of you guys hand me a cell phone through the window and get me in touch with Officer Jellon.” They were like, “Oh, you know Officer Jellon?” And I’m like, “Yeah you dumbass, give me the fucking phone.” Oh man, I was so out of control...

So then I went out and I stuck the cross outside the door and I thought they would have a bunch of guns trained on me. They probably did... I don’t even know. So I came out with my hands up and everybody was cheering.

Greg: You mean the cops, or your friends?

Dan: Everybody... all the social workers, my roommates, and the cops and everybody. Everybody was clapping. I think they were glad there was no blood shed. So I got in the ambulance and he tells me I don’t have to be strapped down, and I was like, “Can you strap me down anyway?”

Greg: Why did you want to be strapped down?

Dan: Because I just felt like I had been so far gone, and I felt like I was making everyone else so uncomfortable, that I was this total time-bomb or whatever... and it felt SOO good to be strapped down, I’m telling you. I was no longer just shooting out of my body; it was like I was being completely held down finally... And I remember getting to the hospital and there were all these beautiful nurses, and I was like, “You’re so beautiful... I love you...”

Dan: It took them like a week to get me down, too.

Greg: Was that the culmination of your manic episode?

Dan: Yeah, that was the last hospital I went to. They took me to Harborview. I was in two different wards there.

Greg: Well, that’s an interesting story. I remember a few years ago there was a story in the news, about how downtown Seattle was shut down, because there was a guy standing on the corner with a sword, waving the sword around at people. I mean that could have been you waving that sword. And if that had been you on TV, people would have thought: "Oh, there’s some crazy guy," and that’s all they would have thought.

Greg: But if they knew you, like I know you, or even as well as somebody who reads this interview will know you, they’d know that you are a whole lot more than “some crazy guy,” which is of course an understatement.

Greg: So, now I can really see the purpose in including in your documentary some celebrities who are “crazy” because, since they are celebrities, and people have had a chance to see them on top of their game, people will view them as “normal.”

Dan: They don't even have to view them as normal... just that they know them.

Greg: So they would see a celebrity as if it was someone they know, who happens to have gone through some episodes of craziness.

Dan: Went through an episode and came out, still human. If they've seen Drew Barrymore in ET or 50 First Dates where she’s so sweet, it would take the stigma out of it, when they learn that she has had problems, too.

Greg: Who all were you thinking of seeking out for your documentary, if you don’t mind telling me?

Greg: The author of The Joy Luck Club?

Dan: Yeah, she was out of her gourd. She was hearing things and seeing things, and then she got treated for Lyme disease. She’s totally fine now.

Greg: It sounds like you want to show how “craziness” is more of a circumstance in somebody’s life, rather than a defining characteristic of the person.

Greg: It’s so interesting how, in this discussion of “craziness” we found ourselves talking about the celebrity culture, and the editing process that is necessary when we present our ideas to people, or when we make art, because, for better or for worse, so much of the process of making art, or promoting someone into celebrity status, involves editing out the crazy parts.

Dan: Or working with them, enhancing and channeling the crazy parts. I mean, for a lot of celebrities, the reason why they are celebrities is because they are eccentric or at least unusual. People like unusualness, as long as it's not their own neighbor or some guy drooling on the sidewalk. But when society blesses someone as a celebrity, then their unusual behavior becomes acceptable or even admirable. What a lot of people don't realize is that a lot of these actors and rock stars and what-have-you really are crazy, or I mean they are at least for a while.

Greg: You mean "crazy" in the way that you have been, where they need help from health-care professionals.

Dan: Right. But since they are "celebrities" society never takes their humanity away; it's like it's just part of their art or something.

Greg: So, it's like there is a continuum, with celebrities at one end, whose every act and word and inner experience are glorified, and we almost cannot even conceive of them as being "crazy"; then in the middle there are all of us regular everyday folk, who are accepted and basically ignored, as long as we play by the rules; then at the other end are the ones who are officially designated as "mentally ill"...

Dan: ... who aren't even thought of as people, fully. But I want to show that nobody on that continuum is really very much different from anybody else. Even when I was totally bonkers I was just as human as you or anybody, and no "celebrity" is really any more together or "worthy" than you me or anybody else. I mean I know it sounds corny and a million have said it already, but inside we're all pretty much the same.