G: This may be a little pat, but if it IS a museum, can we see this reflected in the structure of the book?

R: Well, there are these very definite scenes in the book, these vignettes that may last a few pages or might even last most of a chapter. And there are sort of logical divisions that have been discovered within the book, and have been outlined by a Joycean named Bob Williams. If you look at my copy of the book, you'll see I've got section divisions. Strangely, most people agree on these. Sometimes there is even white space in the book, but not always. Those are what I think of as the rooms of the museum.

G: So you've got a spatial metaphor for the structure of the book, and earlier you spoke of a more cyclical, time-oriented structure, where the end and beginning blur, but there is definitely a forward motion, even if it circles back on itself. 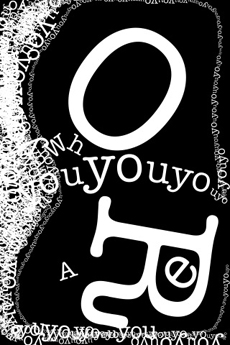 R: Ah, well Joyce put a lot of little structures in the book. One that he used is patterned on a four-fold theory of history by Giambattista Vico, who had an idea that there was a "Golden Age" and then three succeeding ages, with each getting worse and worse, and then there is a rebirth at the end of the cycle. That's why this book is in a circle. And so the book is broken into four parts and the first part, the Golden Age has eight chapters, and the next two sections have four chapters each. And then the last section is just one big chapter.

G: So I take it things follow that progression of degradation in the book?

R: Well, yes, and people sometimes think Finnegans Wake is a pessimistic book, because it kind of ends on a down note, with Anna Livia , the River going out to sea, breaking down in despair and depression. But because it's a loop, it's both pessimistic and optimistic.

G: And on a plot level, how does it begin, if you'll allow me?

R: The first part is when Finnegan falls off the ladder, or Adam falls from grace in the garden. That's sort of the fall of man. It starts right off with that. It's like, here's Eden... and down here, on the first page, is Fallen Man. See that 100-letter word? [Ron points to a location on the page.] That's the thunderclap. That's The Gods' anger. And actually it echoes throughout the book, and especially the first chapter. Various things fall, and then in other chapters there will be the actual "wake" and so on.

G: So the first section is The Fall.

R: Right, the first section is like prehistory. That's where Finn features the most, because Finn is the past incarnation of HCE, and then he gets buried, and he wants to get up, but his children tell him to stay down.

"Now be aisy, good Mr Finnimore, sir. And take your laysure like a god on pension and don't be walking abroad."

And then he decides, "Oh well," and he goes back to sleep, and HCE pretty much takes over. In the second and third sections, the children of HCE and ALP are featured, and in the fourth section, as I mentioned, ALP has a long monologue.

G: Your explanation, earlier, of the many little "scenes" or museum rooms almost makes me think of a screenplay.

G: Or like Cyberpunk – in the way that Cyberpunk today usually imagines a future that's not very far off, and extends trends. Maybe it was like the Cyberpunk of the Thirties.

R: It doesn't have very much in common with the mood of Cyberpunk, but... he was all over the place. It's more like... well it's sui generis. There's nothing else like it, but I'd liken it more to, perhaps, the Surrealist's experiments. Almost like throwing stuff together to see if anything makes sense. HIs approach was a lot like the "cut-up" techniques William S. Burroughs played with, in the Beat era.

R: Well just in the sense that Burroughs would take stuff and throw it together. That's the similarity. I mean, Finnegans Wake would take long lists of song titles and that would go on for pages. Popular songs of the day. There are lists like that throughout the book. There are lists of presents that Anna Livia gets her children.

R: Joyce said at times – it's hard to tell if he was joking or not – that he was trying to write a new Bible, a new scripture.

G: Is there moral wisdom in it?

R: There are all kinds of little proverbs and sayings throughout the book, quotations from the Bible and the Koran.

G: Does he make his own up too?

R: Yes he makes up plenty of his own. So I would say if there is a moral teaching in Finnegans Wake, it would be "Take the bad with the good." It's like I was saying before: optimistic/pessmistic. That's the garbage heap. It's got good and bad. I don't know what other people think but that's one of the things I've taken to heart from the book.

G: As you talk about it, it doesn't sound so much like a story, it sounds more like a three-dimensional world. If you were going to bring this to life as some kind of dramatization it would be better done not as a film, but almost as an amusement park. That's the feeling I get.

R: Yeah, well, that is an apt observation, and I think "amusement park" is also appropriate because there is a strong populist element to the book. People think of it as elitist, but I think it is populist.

G: Can you explain that dichotomy?

R: Well, most people think it's elitist because it's so difficult, and many people consider it part of the Western Canon, but almost nobody ever reads it.

R: But, in reality, it is a lot of fun. It's full of both wry humor and ribald humor. The things it deals with are very everyday common experiences.