G: What's the difference between a character and an archetype, in the context of this book?

R: Well, the thing is, HCE is not just one person. That's why they call him Here Comes Everybody. He's embodied in various people throughout history and literature, so he's sort of this murky figure who looms out of the mists of time. He's sometimes known as Finn McCool, or Finnegan. Finn McCool is the ancient Irish culture hero, and Finnegan is the hero of the song "Finnegan's Wake" that the book is named after.

R: Yes a real song. He falls off his ladder and breaks his skull and at his wake he's splashed with whiskey and he revives. 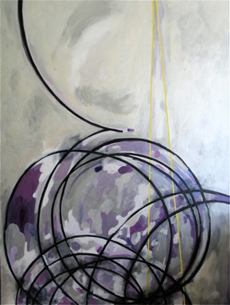 R: Yes, also in the book. But in the book he's also Finn McCool. He's all these different characters, who run together to form this figure, or archetype that I would call HCE. I guess you could say he's kind of like Adam, because he's fallen – off the ladder. In our group we've taken to calling these composite characters ginkuses.

"But whom for plunder sake, he mistook in the heavy rain to be Oglethorpe or some other ginkus."

So we call figures like that ginkuses so we don't have to argue about whether they are characters or archetypes or whatever.

G: Oh OK, kind of like the wavicle in physics?

G: Now is "ginkus" a widely used term among Joyceans, or is it your own private code within your group?

R: It's our own private little joke, but I'd love to see other people use it, to sort of terminate the debate. There are two sons, Shem and Shaun, who are also ginkuses and there's a daughter called Issy who is also a ginkus, and they appear multiple times and their relationships reappear throughout the book.

G: So far, I'm hearing of five major ginkuses. Are there other distinct characters who are clearly independent of the ginkuses?

R: Well, nothing is independent in the book – that's what makes them ginkuses. But there are various other lesser figures who kind of split off and rejoin the others. One other incarnation of HCE is a publican, a barkeep, in Dublin. And they have a kind of a maid and a security guard called "Kate" and "Sackerson". So those guys show up sometimes. And Sackerson sometimes shows up in a kind of dream that HCE is having. Well, actually the whole book is a kind of a dream.

G: That's one of the only details I knew about Finnegans Wake, that it depicts a dream.

R: Yes, and it's a very guilty dream. HCE believes he has committed some sort of sexual indiscretion with a girl in the park.

G: That sounds like a scene out of Ulysses.

G: What kind of preparation did you have the very first time you read the book, or were you a complete virgin or what?

G: What would that mean?

R: Well for instance, there are phrases like LSD in the book, that predate the drug's discovery.

R: Yes, that's a good word for it. I don't believe it though.

R: Well, he's a bit more agnostic about it then that. He does put it forward as kinda, "Hmmmm... isn't this peculiar?"

G: So you read about Finnegans Wake in Robert Anton Wilson's book, and then what?

R: I read the first few pages, and I was able to make a LITTLE bit of sense out of it, then I read it with a friend and there's a short dialog two pages in, between two characters named Mutt and Jute, who are like cavemen, and they're sort of like encountering each other, and it's pretty funny if you dip into it. It's fun to get somebody else to read the other part... just to read it back and forth. And that seemed to make more sense. I didn't really understand at first that reading it with other people is the key. Because there is so much here. It's not as rich as the real world, obviously, but it is very rich and more than most people can understand in a single reading.
The thing is, Joyce was extremely well read... he would take ANYTHING and put it in the book. We'd come across things all the time and look them up and ask, "Where the hell did that come from?" Like the story of "Billy in the Bowl." Billy, who had no legs, would somehow manage to mug people and take their money and lived in a bowl. It's a true Victorian story that made it into the book.

And Finnegans Wake is a huge metaphor... the book itself exists as a metaphor for itself, a garbage heap.

G: How does the book show that?

R: There's this scene after a battle: there's this great big garbage heap and there's this chicken who is ALP and she is pecking through to try to find things of value. It's pretty clear that this is the book talking about itself sardonically. And it also talks about itself as a kind of museum. And there are all these artifacts in the museum and artifacts in the garbage heap. It's like a record of history. I know I must sound kind of mystical...

G: No, not excessively so.

R: OK, thanks. I was playing with some language earlier today. Trying to give you an example of the kind of thing Joyce might do, without using something actually from the book. So I thought of, say, Billy in the Bowl... he stops someone and says, "Spare a dime for a cup of coffee?" Except Joyce would spell that "coughey" and you don't know whether he's asking for money for a hot cup of coffee or for cough syrup. Things run together, so is that coffee or cough syrup, or both? Usually it's better to go with both. Is it a dump or a museum or a book? It's all true.