Leon and Brian show me the Hymnotron, a colossal and gorgeous instrument that stands about 7 feet tall. Its look recalls an old church organ, or perhaps a church itself. The wood cabinet has a sumptuous walnut finish. Brian’s accomplished furniture-making skills bring a period visual aesthetic to the sound experience.
The Hymnotron is a “just intonation” chord organ, which Leon and Brian explain after a demonstration. Basically, what I learned from them is that prior to the 20th century, musical instruments were tuned in such a way that they sounded perfect in one particular key, but when they were played in other keys, the harmonies would sound either a little bit or quite a bit off, depending on which key it was. In the 20th century we began using an “equal tempered” tuning system that was designed so that playing in any key yielded harmonies that were equally – and only ever-so-slightly – off, but never totally on. Therefore, most of us alive today have become accustomed to music that is never exactly quite in perfect harmony. The Hymnotron uses electronics to overcome this dilemma, calculating intervals on the fly as the musician moves through different chords, so that every chord sounds perfect in the ancient sense.


Click on the player below to hear Leon give us a demonstration of the Hymnotron. 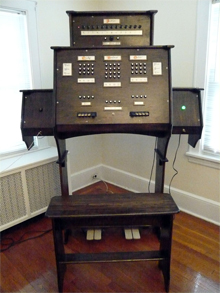 Leon: Yes – though unfortunately, as you can see, the Hymnotron is so large that the only people who get to hear it are the ones who come to it. It’s kind of a recluse that way.

Brian: Hey should we turn on the Dual Primate Console?

The Dual Primate Console is something to behold. You can think of a double-headed pinball machine with an airplane cockpit’s orgy of buttons and levers, and a rotary telephone dial in the center for added eccentricity. Because the board is so interesting, you don’t notice at first that the whole thing is built on top of walkers – the kind that old people use. On one side is another interface panel with three 8-track tapes that Leon and Brian have recorded over, adding 6 different additional sound sources (i.e., 3 tracks, in stereo, equals 6) that can be run through the main console. Leon and Brian took their stations facing each other and played a sampling of the DPC's sound capabilities. 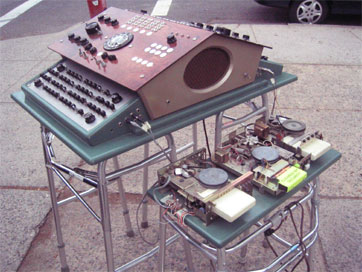 Linda: To an outsider watching, it is pretty bewildering trying to figure out how you are controling all those sound outputs. I wonder if you can explain how you know what effects you are going to get by turning the various buttons and knobs or dialing numbers on that rotary dial?

Listen to this sound-clip to hear Brian explain the interface of the Dual-Primate Console. 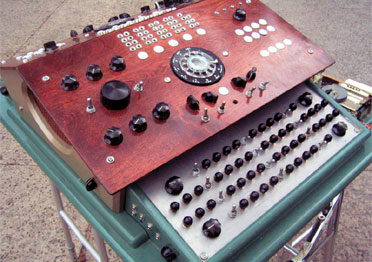 Linda: Who are some of the other unusual instrument-makers or performers whom you admire or enjoy, or with whom you would like to collaborate?

Leon: I really enjoy seeing and listening to Pamelia Kurstin's theremin playing! I've only gotten to collaborate with her briefly a couple of times; it would be wonderful to do more. There's a guy named Ken Butler who builds mechanical and electro-mechanical instruments from household objects such as golf clubs, rakes, etc. I've seen him play a few times. He's really inspiring.

Brian: Lary 7 is a wonderful performer who uses rotating speakers with a clavinet chassis; he made a neon tube oscillator organ, and he concocts mysterious junk piles and makes things happen. We'd love to perform with him. Also Gordon Monahan, who does computer-controlled sound environments; Wendy Chambers, who plays car horn organ; and Simeon Coxe from the Silver Apples. And we'd love to collaborate with the subject of this video. She makes double-reed instruments and Baroque bassoons, as well.

Linda: And, what do you foresee or hope for in terms of Dewanatrons gaining use by other musicians? Would you like to see others possibly become better performers than yourselves?

Leon: I don't think of them in terms of instruments that one is "bad" or "good" at. Especially the semi-automatic ones like the Dual Primate Console – it's not so much about performing in the conventional sense as letting the instruments do most of the work, and guiding them away from being too busy or repetitive. Whenever someone gets to log some time on a Dewanatron in my presence, I learn something new about the instrument; I like it when people take a bold approach to experimenting with them, test the peripheries, and really get a feel for the possible landscapes they are capable of generating. I'd love to see what happens when they gain wider use; the more operators the better, in my opinion.