Contents Menu
prev 1 2 3 4 5 next
An Interview with Leon and Brian Dewan, page 3

At this point, Leon took Brian and me down to the basement lab to show us his latest invention, a prototype for an instrument called the Rotary Ordinator – a dispatching station that controls other instruments in the Dewanatron family.

Leon: I've had to create the Rotary Ordinator for when we move our instruments around the world. As I said, it's easier if they are in smaller chunks. In the past, we've had problems flying with the Dual Primate Console, both because it is large and heavy and because it is made out of untreated plywood. One time we got hung up when a German customs officer was afraid that the wood could be harboring insects! Let me show you the very first one, the Alphatron. It's based on a sound synthesizer chip called the SN76477, that was made by Texas Instruments for use in the early video games. 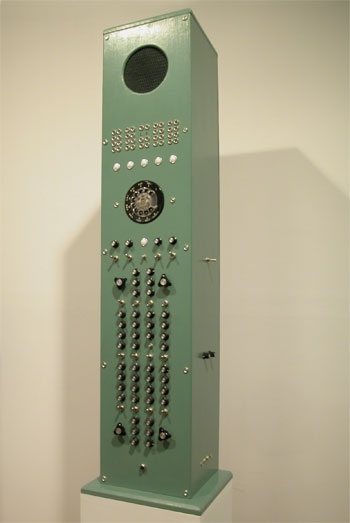 Leon: Yeah. I've had the chip knocking around in my toolbox since 1978. I got it when I was in 6th grade. It was my grandfather who insisted that I have one.

Linda: Both your grandfather and your father were inventors, right?

Leon: Yes. My grandfather was Paul Cottrell. He came up with an early practical plastic rollerskate wheel sometime in the 1930s, I think. Apparently the Cottrell Wheel was legendary. The whole family was super into rollerskating after that. He was also obsessed with UFOs and other paranormal phenomena, and from the early '60s until his death he was constantly working on developing a relaxation technique that involved pumping easy-listening music through an armchair, and later a waterbed, with a "psychedelic control center"-type light display going on simultaneously.

He was fascinated with electronics and music synthesizers, in a very pre-rock way, and he encouraged me to buy myself that SN76477 chip. He also gave me the schematic for the very first audio mixer I built back in 1983 or so. He actually got to hear "Divide by Zero," a recording created with a calculator, an electronic quiz game and an AM radio that Brian and I made in 1980. He liked it a lot.

Linda: Awesome title. And your father? What was his influence?

Leon: I feel that I learned just about every useful electronics skill I have from my dad. He was an inventor for most of his life. The idea behind one of his first patents – the Lucky Brake roller skate brake from the late 1920s – ended up on rollerblades in the 1990s as the ABS brake. He held about 25 patents covering a wide variety of really cool inventions, such as the "Fizzmaster" a super-efficient soda carbonator; a process for cheaply manufacturing ultra-accurate wirewound potentiometers that had a huge impact on the field of analog computing; a magnetic gearless transmission; a helmet/visor for arcwelding (you could see everything clear as day but the spark); and many others.

Linda: Did you work with him on any of his inventions?

Leon: I did. While I was growing up he was working primarily on ideas involving radio-frequency vacuum tube circuits that I constructed and later designed with him. I started soldering at the age of 7 and was working with lethal voltages by the time I was 11 or 12 – and never got killed!

In working with him, I really got the hang of prototyping – patiently testing each section before putting the whole thing together – and I gained an intuitive, homegrown approach to understanding electronics. My father never went to high school, was completely self-taught, and had a uniquely visual way of understanding physics. This led to him coming up with an electromagnetic paradox that, after being spread widely among the physics community by his nephew [Brian's dad, Edmond] in the '50s, still shows up in some form in papers on electromagnetic theory every once in a while.