D: OK, going back to when you were young. Can you remember when you became aware that you were different from other people?

B: Well, I think I always knew I was different, but at the same time, the way my family handled things was to try to be normal. On the positive side, that family dynamic helped me be really independent, to act like everything's totally typical, and just get things done. Looking back on it now, however, it was more like a mask or a cover-up. As a "good Christian family" there was kind of a sense that we should make everyone around us think that we are always doing fantastic! Later in life I realized that that's probably not the best way. In my mid 20s, I recall I had a conversation with an old friend. She asked me, "Do you not realize that you are different from most of us? Why can't you just come to the conclusion that you are different and go with the strengths that you have?" It wasn't till then that anybody had even brought that up to me. It struck me then that I had spent my whole life trying to convince myself that I wasn't different.

D: I'd had this image of you being like age 4 and going, "Oh my god, I am a goose and all the other kids are ducks!" 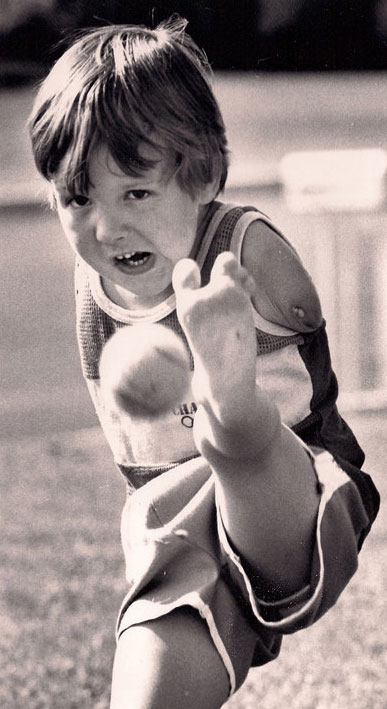 B: That's probably a common assumption, like my life should follow the plot of a TV after-school special. It reminds me of the time when someone at work asked me if my stuffed animals had arms when I was a kid.

D: So, you went through the duck-and-goose thing when you were older.

D: Was there a point in your life when you made a decision to be more ambitious or less ambitious?

B: I never really made a decision to be more ambitious. I've always been kind of inclined that way.

D: As Lady Gaga says, you were "Born This Way."

B: [Laughs] I have friends who say that should be my theme song. In terms of ambition, I always got really good grades. And I fully engaged in sports along with my friends. In elementary school, when we played baseball, I would hold the bat between my chin and my shoulder, and throw the ball with my foot. In football we had special rules, like if the ball hit me in the chest it was like a catch, and I could just run, as if I had the ball, and they could tackle me from there. Basketball was always one of the more challenging ones, but I was able to put the ball on top of my foot and throw it that way. So, I never had the attitude that there are things I just can't do. 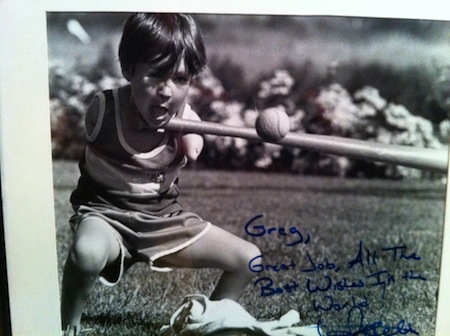 D: Except, as you mentioned before, mowing the lawn, which I never would have thought of.

D: What are your dreams like? Have you ever had a dream in which you have arms?

B: Interesting question. I don't think I've ever had a dream like that. But my biggest recurring fear-dream – like some people's is being chased, or whatever – the biggest thing that jolts me awake is dreams of falling. Other people wake up from dreams where they are falling from 18 stories, and for me it's just walking down the sidewalk and falling forward. I've done that several times in my life, and given myself five or six decent concussions, because when I fall forward I can't catch myself. I've broken my lip open, I've ruined glasses. I wake up out of these dreams because I'm trying to avoid my head hitting the ground.

D: Because you rely on your feet, not just for locomotion but for manipulation, do you have to be extra cautious about not twisting an ankle, for example? Have you ever had injuries to your feet that left you helpless?

B: Not to my feet, but I'm definitely cautious. Like last night I was walking back from a restaurant with friends. It was a slightly uneven sidewalk, so I chose to walk on the grass, and even then I had to be extra alert to not step in holes, etc. Whereas none of my friends were probably worrying about that very much. Last year I went out for drinks with friends, and it was one step up to a booth in the back of the bar, and I didn't see it, and I tripped in the dark, and I fell straight forward. I'd just gotten new glasses and I'd spent way too much money on them and so my reaction was to pull my head back so I wouldn't hit my face on the ground, because I don't want to break these glasses...

D: You're thinking all of that in a split second...

B: Yeah, so by pulling my torso back like that, I ended up thrusting my ribs into the ground, and I either broke or fractured a rib, so for like six weeks it hurt to do anything, especially leaning forward.

B: So, yeah, there are probably times when I should be even more cautious than I've normally been. That said, strange as this may sound, I also find I'm at a point now where I'm more interested in "living in the moment" and taking my chances, and I'm willing to suffer the consequences.

D: Nice. But... I don't want to see you smash your face on the sidewalk.

B: [Laughs] Somebody said to me, "Maybe we all shouldn't have gone out and had such a good time," and I said, "No, the lesson is I just need to watch for things better." The lesson is not to hold back in life, it's to just be a little bit more aware.

D: Have you endured social abuse, like being picked on or singled-out, either as a kid or an adult?

B: Not in any major way. I had one really good friend in junior high who lived near me and we were always going over to each others' houses and stuff. And at some point in high school he told me that he had gotten kicked out of school about five or six times for getting in fights to stick up for me. And I actually had had no idea. I couldn't remember any time anybody said anything that offended me. So I guess it was happening, but behind my back. I always had really good friends sticking up for me, growing up.

What I notice more, as an adult, is folks staring. There was a guy walking down the sidewalk from about half a block away totally staring at me, so I started staring back at him... like reaching my neck out, not glaring at him or anything, and as we passed I turned my head to keep eye contact with him. That's less of a bullying situation than...

B: Yeah. People just not recognizing how they are affecting me.

D: What was going through your mind?

B: Well – I mean, I get double glances, and I understand that the fact that there's a guy walking by with no arms is fairly unique. So I don't really mind the reflexive double takes. They can't help that. But when they lock onto you, that's when it crosses the line and becomes socially unacceptable.

D: Is it that you want them to follow the same social graces with you that they would with anyone else? What I'm thinking is that if I were walking around and I came across a strange-looking animal, I would not hesitate to stare at that animal, because I would not think the animal would be made to feel self-conscious by my staring, whereas with a person it would be different. So, it's like they are not thinking of you as a person?

B: Yeah, it's almost like... if you are going to be curious, then be actively curious. If you're really curious, then stop me and say, "Hi. My name is Rob. You carry your phone on your shoulders and that's amazing to me. I just wanted to introduce myself." Because at least that opens up a dialog and we can have a conversation as equals. But when someone just sits on the sidelines and stares, that becomes more awkward for somebody with a disability.

D: So if they verbalize their curiosity, that makes it better than if it's obvious that they are noticing you but not addressing you as a person.

B: Yes, but, to be honest, there are even times when I'm not up for that. I was in the grocery store a few weeks ago and it was about 9:30 pm, I literally had no food in the house, and I just wanted to get in and out of the grocery store and get back home, and there was this woman in line behind me and she was like, "Oh my gosh, that's amazing. How you can put your stuff on the conveyor belt? Oh my gosh, you can sign your signature with your shoulder. How'd you learn to do that?" And I'm thinking, I'm so tired right now, I just don't want to deal with this. And it's not that I was frustrated with what she was saying; it was more that I can't ever escape. One of my friends jokingly said the next day, "You should just really wear a baseball cap and sunglasses to the store – that way you could disguise yourself a lot better!" [Laughs] Often I feel like "Can I just hide? And not have to deal with this for a day?" But I don't get to ever really step down from that stage.

prev 1 2 3 4 next
comments powered by Disqus