Linda has outgrown, and that is a fact. Linda takes the stairs. Linda drinks water. Linda is a Pisces but doesn’t know what this means. Linda wears business suits and pretends there is no nonsense in the world.

Linda kisses dead bodies on the lips. Once. Not very sensuous. Just enough to say goodbye.


Julie Portness, extremely firm, but that could be rigor mortis or injections or the implants they used to put her face back into shape.

Glue and wood and screws and metal and her own bones.

Down into her coffin.

Julie matches her coffin. She is très à la mode. That is Julie. Pretentious bitch. More than slightly dead.


Julie was never the type to kiss dead bodies, not on the lips, the cheeks, the forehead. No sense of convention could have made Julie lean over a coffin and check the temperature and consistency of the flesh of friend or foe.


Innocent children like Richard and Camilla kissed their pets and hugged them tight after they died and petted their fur back and tried to dress them for tea parties and pretend they weren’t dead.

with the very idea—


In a small town you always wear black to a funeral. Everyone goes to the funeral. It’s the people who don’t attend who cause a stir.

One of our own.

Eyeing you at the diner.

Did you know things you shouldn’t have?


There are no secrets. Pshaw.

Red leather, yellow leather. Booths and chrome chairs and diner tables screwed to the floor, black and white floor, classic diner floor, fluted glasses with the death of an ice cream float staining the inside, turning sticky the longer it sat, needing to be scrubbed out by small hands. Bernice had small hands, a will to serve, a perky smile, and a trick or two up her sleeve. Short sleeves. Under a frilled apron. Matronly apron, not sexy apron. It’s a small town. Keep your eyes to yourself. There are no skirts here to look up.

Bernice stops to tie her matronly shoe. Her skirt rides up in back.

with a pitter patter


Babies are creepy when they don’t grow up, just get bigger and start displaying human expressions and gestures and walking and they still have the face, crinkly, of a newborn anteater without the snout. Time is like a baby. Not aging. Just getting out of control.

It’s something you shouldn’t think about. Time. When people start thinking about time that’s when they retire to spend more time, they need more time, and in reality, because they’ve recognized the existence of time, that’s when you find out


And not very slowly at that.

A psychopathic break with your id?


Staring in the mirror: I don’t like you anymore, leave me alone.


If glass cracks slowly, it sounds like ice, on a pond, cracking when sunlight hits it, or you walk out too far, just slightly too far, and it begins to give under your weight, but if you don’t panic and keep your heartbeat steady and think clearly, maybe you can figure out how to turn around and

You go to work.

You drink your coffee.

You have a schedule. Sleep and wake and damn that alarm just five more minutes.

Oblivion is lurking, minutely, just outside your field of vision, and sometimes maybe it doesn’t seem like it’s that bad an idea, just five minutes, outside of this reality, whatever and wherever it is with its teeth and claws and halitosis and that little kidney stone, they said it’s so small but it doesn’t feel like they know what they’re talking about.


See, that’s the moment when oblivion, which has been shimmering just to the edge for so long, suddenly pops (POP!) up and dissolves like fog in the sunlight and you realize you’re staring at something familiar but you’ve never seen it like that before.

A hearse too slow: do you pass, or do you take it for its symbol: drive slower today?

It’s not you, today, who died, but it’s Julie, and everyone knows Julie, that’s what towns this size are like, you watched her grow even if you were across town and never talked to her. You didn’t die today, but hers is a face you’ve seen every day, for no reason, almost like family, because you can’t pick your family, that’s a familiar face. And after you kiss it goodbye (goodbye, Julie), you’re never going to see it again.

With real family, sometimes you know that feeling of


Because sometimes… well… it’s providence. No more bad words and tatty feelings and sniping contests and dementia-addled amenities that include dirty towels and harsh phrases like hate and you whore.


Blink. Oblivion dissolves. The curtain of sunlight. It’s like a puppet show, pulling back and showing you your own world without all the extraneous details, just everything you’ve ever needed to know.

Blink. Oblivion dissolves. And what’s left is not a body, but knowledge.

Everyone knows what happened. How Julie died.

And it is at this moment that it’s all or nothing. No one is going to come forward and say, Hey, I can point my finger. You learned it early. You don’t point. It’s impolite.


The fist has been forced.

Fifteen people pull the proverbial knife from Julie’s back and turn around, swiftly, with force, and the knife comes to a stop, jerking from their hands, and there’s a collective gasp.


Fifteen people pulling fifteen proverbial knives and thrusting into fifteen annoyances, as if Julie was a beacon, as if it could be done, as if one suicide begets another because none of them were self-murders at all, but maybe, just maybe, this one becomes these fifteen and all will be overlooked.


Next week is going to be a busy week for the single funeral parlor.


One could be overlooked.

Two could be overlooked.

Fifteen becomes the poison of a dying town putting itself out. Please let us all die, please. Please.

Mrs. Bucket, “I was sorry to hear about Mrs. Temper.”

“Pardon me, I think I hear my kitchen timer.”

“I mean, I’m terribly sorry. We’ll see each other at the funerals.”


Linda scrubs her nails under the hot water. She uses the cuticle brush. She uses the lava soap. She exfoliates. She feels clean. For the first time, the very first, like a newborn baby without the guilt of a dirty birth.

She turns off the water and grabs a paper towel to dry her hands, red and scalded and oh so clean. She bleaches the sink, the knife, she prays while she does it, to Julie, dear Julie, who had given her the idea and the hope and the impetus. Julie, it is this moment that I can finally move forward and life can continue which it hasn’t done in seven years.


But it’s a shock, when Linda returns from the hot scalding water and the purity of her head, to the sidewalk where people cry in front of the dry cleaner’s, across from the church, it’s the best area to cry in town, always warm with that sweet smell of detergent, with the bells gently swinging low my dear sweet chariot and the shadow of the cross falling over your feet. That’s where the shock hits. She wasn’t the only one inspired. The dirty feeling of sticky blood returns. One death can be overlooked in a town of five hundred.


One moment, this present moment, can make it all worth it: a single breath. Enjoy this breath, this one breath, because this is the feeling of a light heart. Forsake the future, forget the past, both destroyed in one moment. This is redemption.


It’s grown cloudy and the shadow of the cross has disappeared, and all that’s left is a coroner and a deputy, shaking their heads and peeling away the scabs that still hurt and saying, This here is not your blood. 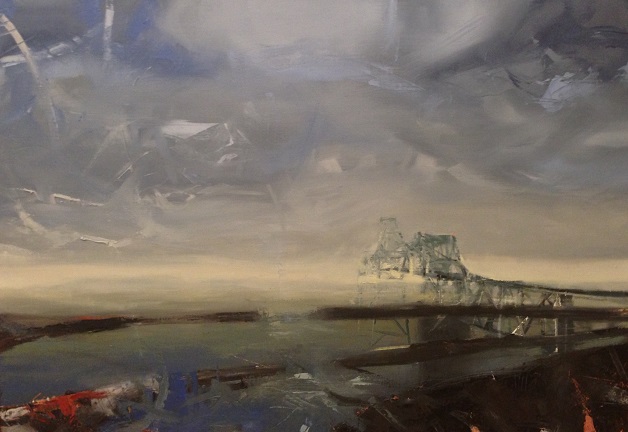