It’s something you watch over and over. You think you’ll get closer to understanding it, if you can just see it again, again, in slow motion: the body, impacted unnaturally, just above the knees, and how it takes flight.

There are many things you’ll be forced to consider. . . like the direction it takes. Took. Why and how did it launch upward? And not just straight up, either. Flipping end over end, gracefully, skyward. How did the blunt force of impact not cause a body to flatten forward, folding under the car?

(Later on, taking a community college course, you’ll finally start to get the physics of it. . . And then, one day in class you’ll feel compelled to raise your hand, to explain that physics is not the whole story. The body flies for other reasons that physics does not reveal.)

The body’s name... it has a name. Had. The body’s name was Kyle. In the movie it’s Joe. There’s that one scene in Meet Joe Black. . . I'd rented it years ago and watched the scene over and over, trying to understand the geometry, the vectors, or what have you, of how it moved like that. Crouched in front of the T.V. on the floor with the remote, watching Joe Black as he crosses the street, and then that car hits him and sends him flipping and flying. . . I rewound and rewound till my boyfriend said to knock it off already, I’d wear a hole in the video tape and then we’d have to buy it and the movie wasn’t THAT good. . . or maybe it will get good but we’ll never know if you don’t stop rewinding that scene, and what is up with you anyway?? I took the movie back a few days late.

They ask me if I consider it every time I go out in my car? Short answer – Yes. Just about every trip, I almost always have one point in my drive – usually at night – where a person appears from out of nowhere. In this moment in my imagination, he’s someone who is getting out of his car and he stumbles, or she drops her keys in the road, or maybe they suddenly walk out between two tall vehicles, and this would happen just as I am passing on the busy arterial, with cars directly beside mine and I can’t swerve over left because I'd push some other car into oncoming traffic, so it's either them or me. And all of this the brain, amazingly, weighs out at lightning speed and computes how or if I can escape, doing the least possible damage. (Or possibly the brain is plotting something else entirely. Stop right now or this question will run your life.)

So, yes, I think about it. And the thing I can say that I wonder all the time is, why do these things, these scenarios I picture, only occur once in a blue moon? Why do they not happen more? And why did they – so very many times – not happen to me? All the time, people do these sorts of every day activities: drop keys, trip and fall in the street, misjudge distances, forget to look, forget they are in a body, or forget that the body must obey specific laws. Right? It seems almost improbable that people don’t do these very human things in the path of moving vehicles more often. I mean, pick your head up and look – cars are everywhere. There are many places to go and 97% of them you have to get to in your car. I know because I am always in one. I am always, everywhere in my car.

But perhaps you are walking your new puppy. Then you won’t be in a car but it’s still likely you will be near many of them, walking, unprotected. And here’s where you get into odds and chance and fate and such, because, like Kyle, you may be out walking, then suddenly your puppy dashes into the road (for what reason, little doggie? what was so important? did you know something? If you could please, please tell me...), and so you go, by instinct, right out after it. And then, the next instance of your life, you may be the body flying high overhead for an unknowable number of seconds.

Or, one moment you are just driving down a stretch of road whose familiarity has betrayed you. You do this drive so often, you don’t have to pay much attention. What were you doing right then? Were you adjusting the radio? No idea. You just don’t have an answer. And the only way you know that it’s seconds and not minutes or hours that have just passed from when you and your car met Kyle is because that’s what they told you--that it occurred at 8:57p.m. And it has to make sense, so they are right – you did leave the parking lot at work at about 8:35, so that puts you on 9th Ave. at about that time – but at the same time not right. It’s impossible to say something like that happened at a specifically namable time. It takes something like forever, and you are still waiting . . . . . . . . . . . . . . . . . .until the body finishes its flight and hits the roof of a car behind.

And you will wonder, does it do this by itself; and if not, who is moving the body?. . . Or should you believe that God does it, and what does that say about God, to put on such a show like that, such acrobatics, with a body at a time like this? Or you wonder if, like they tell you, it’s you who sent the body flying, unnaturally airborne, backwards down the street. Could you really be that powerful? But Kyle, I didn’t touch you. You know that, I am sure of it. I saw your face. 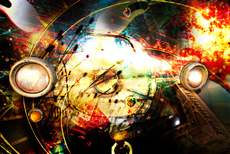 Kyle has an almost angelic face. Just a quietly stunned angel in the headlights. (Was I the Light, your illuminator of heaven?) Kyle Sweet-Angelface, that’s my name for him. Eyes like the dearest and clearest thought you will ever have. Yes, that thought, the moment before impact.

He was a buff angel – a sturdy torso in a muscle shirt. It’s no wonder it hit with such a massive, loud thud; the force of all that specific gravity crashing down on flimsy steel. And in case you are sitting there trying to imagine this or think of something to compare it to, I can tell you that you cannot. And you’ll never, ever hear any noise the way you heard that one. The way it carves a groove into you, into a part of your brain so deep that you had never known existed.

They say his little puppy made it across the road fine, dragging its leash and scooting between the cars. Adroit little puppy. I think we would agree it’s a startlingly tragic fact – our lack of agility compared to a dog. We humans do our best; we work out in the gym to get in shape, eat right, do our relaxation tapes, and still a puppy will be more up to the task of navigating this crazy world that we have created.

I’ve read that all animals have a thing called the freeze response. You either fight, or you flee, or, in a sometimes ironic twist, you freeze. There are good reasons you might freeze, say if you are a mouse being tormented by a house cat. You play dead so the predator might let down its guard or become disinterested or at least it might become confident enough that you are dead to turn away for a second. But there are really obviously bad times to try this tactic, and unfortunately, you won’t necessarily choose the best response among your choices of freeze, flee or fight, for your situation. It all depends what your brain chemistry fires out right then. Human brain chemistry has not caught up with all the components of our modern-day existence, such as oncoming traffic.

I knew someone in college who must have experienced this. She left campus with a group of friends to go for a late-night run to the Taco Truck. This was a popular place to walk to on study breaks. This time, as I heard it, all her friends ran across the busy street, not waiting for the light to change. She didn’t make it.

—What do you mean, she didn’t make it? I kept asking, how does someone not make it across Echo Boulevard? Did she just stop in the middle of the street? How is that possible?

—It wasn’t even the middle – she was almost all the way across! But a car was coming. . . speeding, up a little rise.

—Yeah, there’s that little rise in the road, sure, I know that intersection. But she could still see the car, surely she could have seen the car?

—Yeah. But she just stopped. She froze.

She was Nel, a junior, someone who I didn’t know well or really like that much, who worked on the social sciences floor of the library. I thought about her incessantly afterward. She had a rather terse personality, didn’t smile too readily, which I always thought was weird. I tried being cheerful and bouncy when I brought my books up to the desk. “What a cool job,” I’d said once, trying for a conversation starter. I would have been happy to work at that library.

—Well, what happened to her then? Did the body flip, fly, or flatten?

You just can’t ask. But I know some of her friends saw. I know, more than I know anything, that, like the aforementioned sound, whatever happened right then to the body of Nel, the burned imprint of seeing it will last until their own light goes out, maybe beyond. You hardly know anything forever, but that is one thing you will. Your head will pound and swim against the undertow of memory.

Is there a self-help group for people who are obsessed with surprise impact? Or for those who are indelibly linked to unbearable, tragic happenstance, but have been allowed to return, on a surface level, to their normal lives? If there is, I will go.

At this group, we can watch Meet Joe Black. We can use the remote and slow it down to really see every frame, from the very moment that the bumper contacts the leg. I will tell my story and people will say: tell us again about that moment, that face of the angel. How the body flew and flew for unknown seconds. How you understand now what the metaphysicians mean when they say that time isn’t real, it’s not what we think, not at all. How there is really no time during that moment. And there’s no time after it. Actually, before, during or after, if you want to get technical. But not too many people can go there. It’s a small group of us, I think.