1. In our minds, we arbitrarily divide the world into fragments and then feel we have discovered something when we find they can be connected.

2. Helmholtz (1878) argued all physical qualities — colour, texture, smell, shape, etc. — belong not to objects in the world but to our perceptual faculties. It is we who mistakenly assign such qualities to the objects ‘in themselves’. This applies even to the quality of ‘objecthood’.

3. In one sense, objects do not have any existence independent of perception. In another sense, objects (insofar as the word has any sense) clearly do exist, since we encounter them on a daily basis.

6. The Paradox of Externalism
Externalists hold that mind and world are continuous because the mind is not confined to the brain but extends into the world.
Yet minds are conscious while objects in the world are not.
So mind and world must be distinct.

7. Conclusion: Mind and world are both distinct and continuous, or neither distinct nor continuous. Either way, the relationship is paradoxical.

9. The best art liberates the mind from itself.

10. Vision is also a tactile sense — we touch what we see.

11. My pictures attempt to both suggest and deny the presence of objects. In this way they offer the viewer the prospect of there both being and not being objects that do and do not have boundaries.

13. Good art can be beautiful, but great art is also ugly. 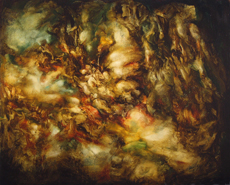 14. One can imagine another kind of consciousness that perceives the world not as made of bounded material objects but of continuous, variegated flows of energy.

16. When I look at an object it is not just that I become conscious of it — it becomes my consciousness. 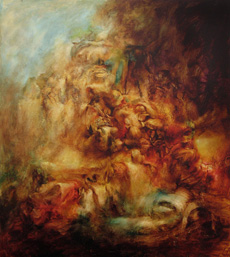 18. Once matter is arranged so as to evoke something other than itself, when it is turned into a representation, it turns into what it represents. A picture of a pipe is clearly a pipe.

20. The paintings should demonstrate that all boundaries are indeterminate.

21. We are used to believing contradictions. Is a man’s hair part of him or separate from him? Both! We are able to treat something as ‘part of’ and ‘separate from’ at the same time.

22. The human mind is present in and recoverable from the material objects we invest it in. When we see a Rembrandt self-portrait we are looking at Rembrandt himself, but also sharing his mind.

23. When we understand that the light emitted by a candle is part of the candle and also part of those who see it, then we have better understood what a candle is.

26. We cannot have thought without contradiction, just as we cannot impose a boundary without creating a paradox.

27. The challenge is to paint something that is also nothing. 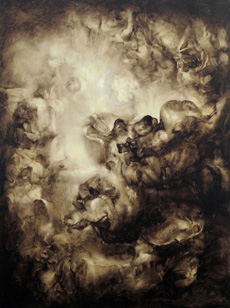 28. Paradoxes and contradictions of self-reference should not be seen as logical dead-ends, or failures of argument. On the contrary, they constitute the very essence of self-aware mind, and the point beyond which we cannot go.

29. Observational drawing requires that one sees what one sees — a greater degree of self-reflexivity.

30. “The purpose of art is to impart the sensation of things as they are perceived and not as they are known.” (Shklovsky, 1917)

31. Because we look at objects only from our own perspective we tend to think of them in very restricted terms. This leads Ouspensky (1931) to claim that “…we see everything as very unlike what it really is.” We never see an object in its entirety, we only see a fractional part.

32. The fact that we tend to regard individual objects as discrete, singular and bounded by an outer ‘skin’ misleads us about the real nature of things. It leads us to ignore what we could call their ‘extended dimensions’, which are no less part of the objects for being overlooked.

33. All objects have extended dimensions, but we normally acknowledge only a fractional part of their true extent because of constraints inherent in our perceptual apparatus and the coercive effects of time. Rather than regarding discernible objects in the world as integral and discrete we must recognise that they, and their repercussions, extend indefinitely through space and time. Objects are boundless.

34. We find beauty in the least probable arrangement of matter; that which is the furthest from entropy. But it is not enough merely to say ugliness is the opposite. What is ugly to one generation can be beautiful to the next.

36. There is something that determines all our behaviour: energy is expensive.

37. We do not usually attribute the value of the work of art to its constitutive matter but to the surplus energy it embodies. The work of art — whatever its appearance — needs to impress the viewer by its standing as material evidence of the artist’s arduousness. All great artists are hard workers.

38. One almost invariably arrives at the truth by inverting what is widely held to be true (including this proposition).

39. All distinctions seem to be contingent on the mind, including that which distinguishes the mind itself.

40. Idealism and Realism are both ideas and both real. Future thought will be able to accommodate contradiction without negation.

41. “There must always be enigma in poetry, and the goal of literature — there is no other — is to evoke objects.” (Mallarmé in Dorra, 1994) 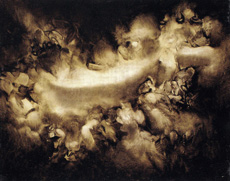 42. To anyone reading this it seems possible to say, “I am your mind.”

43. Complexity lies not on the boundary between order and chaos but in their simultaneous presence without negation.

44. The paintings should contain objects yet be objectless, have boundaries yet be boundless, be recognisable but unrecognisable, without any of these contradictory states cancelling each other out.

47. Self-aware art, like the mirror, reminds us of what is ‘out there’: we and our minds are ‘out there’.

48. The excitatory potential of vivid representations (trompe l’oiel etc.) lies in the fact we see something that is there and not there at the same time.

49. There is no conscious viewer behind the camera of perception — only a mechanism that sees what it sees.

50. If we are able to speak about an independent reality at all we would have to say it is neither monistic nor pluralistic, single nor multiple, unified nor fragmented. It — even assuming it is an ‘it’ — cannot independently enjoy any of the qualities attributed to it by the mind.

51. It is the function of the mind to impose distinctions and make associations. 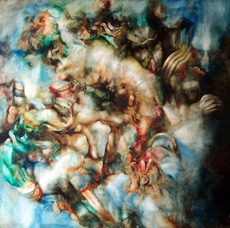 52. Stars and gases are ideas, just as existence is an idea, and ideas are an idea; they are all products of human conception and as such only come into being with the evolution of the human mind.

53. What we take to be reality is not a neutral external fact, but a product of culturally-conditioned perception. If not it would appear identical to all cultures at all times.

54. There is nothing ‘outside’ thought. Yet even this makes no sense, since the very idea of ‘thingness’ from which its opposite ‘nothingness’ is drawn is a construction of the mind, even to the extent the that the mind is a product of itself.

57. We are all born blind. What we later take to be novel visual experience is in fact recognition.

58. The value of art lies not in what we see of a work but in its imaginative repercussions.

59. Great Romantic art (Turner, Delacroix, Martin) induces imaginative turbulence in which we glimpse something of the boundless potential of being.

60. Nothing is more real than illusion: with illusions you get exactly what you see.

comments powered by Disqus
Click on any image to see a larger version.