One summer evening, I was taking a walk through my neighborhood business/restaurant district. As I was turning a corner, I could hear a deep, booming, male voice talking in what sounded like nonsense syllables. It had the cadence of a normal, albeit loud-mouthed, human conversation, but the sounds were completely unintelligible to me. Then I could see these utterances were coming from a guy in a wheelchair.

I realized I'd seen this guy several times in the neighborhood. He had a habit of wheeling himself in to the entryway of a business, shouting to nobody in particular in his own, private, possibly-stroke-induced language, and then wheeling himself out. Kinda sad.

What was different this time was there was a lady talking right back to him. I couldn't help but to try and assess her and put her in a category, but it was difficult. She might have been a drunk, mildly schizophrenic, or totally "normal." In any case, there she was, getting right in the guy's face and carrying on a dialogue with him: 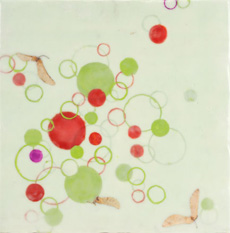 Lady: Oh yeah, that would piss me off too.

Lady: You've got to be kidding me!

Lady: NO – - You are totally shitting me! I can't believe that.

Lady: Well, I would have done the same thing.

It seemed impossible. I found myself standing really close so I could listen better, basically forming a triangle with the two of them. I was trying to figure out if there was any detectable English in the guy's utterances, if there was SOME way that she was really having a conversation with him. When I realized that what I was doing would have been totally rude under most circumstances, I backed up and looked for some signal from one or both of them... I guess I was wanting a mildly nasty glance or something, so I could awkwardly say "Excuse me" and then make myself scarce, but none of that happened. They just kept right on going as if I weren't there, and I went on my way.

Lady: You can say that again!