Shortly after I finished college, I went to Costa Rica and lived primarily in the jungle for almost four months. In the jungle things mold in like three days. A lot of clothes go bad because the air is so wet; nothing can ever dry. You just get used to this kind of jungle funk. The smell of the jungle is musty and everybody smells like that, except people who have just arrived. With them, you can smell their cleaning products really strongly. Well, actually, the locals bathe and wash their clothes every day so they don't have the funk, but the young hippie travelers like me do.

When you come out of the jungle, you will usually shower and wash your clothes, but on my final day, getting ready to return home to the U.S., I didn't have time to do that. 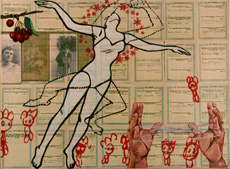 So I came to the airport reeking like jungle. I put on what I thought were the least offensive clothes and doused myself in essential oils. I brushed my teeth and washed my face (but with no soap or toothpaste because I'd given those things away to locals.) Basically I wasn't thinking about re-entering "real" society.

Standing in line to get my ticket, looking back on it I should have realized – the wide circle people made around me must have been due to how I smelled. Once I got to my terminal, I realized I had a little time to finally relax and put my bag down. I was immersed in my diary when a local airport staff person comes up to me and says, "Your odor is offensive. Someone has complained... we are going to re-book your flight for tomorrow, so that you can take a shower." I tried to explain my situation, including my crucial connecting flight, but she wouldn't let me talk, and she just kept backing away from me and speaking louder.

Everybody was looking at me and I was mortified... my face turned red... I shrunk into myself in shame.

People around were weighing in. One said, "Oh that's so unfair." Another said, "Here, have some mango-scented lotion." I looked around and spotted the couple who I'm pretty sure – given away by their smirk – had complained.

With mango lotion in hand, I thought I could convince them that I could get on this flight. As I'm rubbing lotion all over my self, and through tears, I pleaded in my broken Spanish, "You must allow me on this flight... I'll miss my connection... I have to be in Seattle and I only have five dollars... it's not enough to spend another night... "

They talked amongst themselves and motioned me to sit down. First I cried. Then I waited for a long time. When they started boarding the plane and hadn't said anything new to me, I started getting mad. Right when I was about to confront the couple I suspected of reporting me and my odor, an agent approached me and said, "We've reseated you at the back of the plane. Here is a bag of soap. Please visit the conveniently located bathroom immediately upon boarding the aircraft."

After I followed their instructions and took my seat and buckled in, I noticed there was a four-row buffer between me and everyone else.

Several conversations were going in my head at once: "I'm so dumb, I totally should have taken a shower!"; "How dare they treat me that way?"; "This is what it's like to be Other."; and "This is really scary – I'm in another country and I'm not confident in the language and I'm alone and 22" ...and lucky to be on the plane.