I have a leaky bathtub faucet in the home I own in a small town on the West Coast of the United States. I don't know how to fix it, yet I hate the idea of paying a plumber $100 an hour to do something that's so simple. So I go online to a "Help Wanted, Help Offered" website in my little town and write my request, "I will trade you a plate of cookies and $20 if you can make the leak in my tub stop!"

Guy writes back, "I do that kind of stuff. I'll come over today."

About 10 days later I call again,"Uh, remember me?" 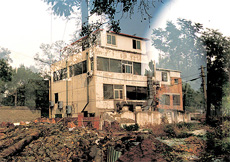 In a few minutes, an old 1950s-era truck trundles into the driveway and here comes this grizzled guy, tall, lanky, with beat-up hands and paint-speckled Carhartts, clothes reeking of baked in cigarette smoke – everything you'd expect in a handyman.

"Haven't I seen you before in yoga classes?" he asks.

I am really quite surprised – he just doesn't look the yoga type. Yet he's down there practically in Ardha Matsyendrasana pose trying to loosen the faucets.

We compare opinions of our favorite yoga teachers and then trade yarns about Indian gurus we've met, until he stands up and reports that the faucet needs replacement parts he doesn't have. He says he'll make a run to town. 40 minutes round trip. Very nice of him.

When the repair is done I ask him how much he wants for his extra time, and he says, "Hey, 20 bucks was the deal." I would like to pay him more for his trouble. Geez, the gas alone, these days...

"I don't have any cookies made just now, but how about a loaf of vegan apple cake?" I offer. He says, no thanks. He doesn't eat wheat or sugar. What?? He's even more of a granola-head than I am!

"Oh, well it won't be easy to make you cookies then!"

He thinks a second then says no matter, cookies are not important. I think that fairly wise council. Before he goes, he pulls a CD out of his Carhartts.

"If you like twangy stuff..." Turns out he's a singer-songwriter in a bluegrass band.

"Well then, let me trade you for one of mine, if you can stomach the NOT twangy stuff!" I jump up and get him a copy of my band's CD of indie rock tunes.

"Great, I'll put it on in the truck!" he says. I ask him about trucks, since I am looking for one, and we end up discussing the benefits of NEVs (neighborhood electric vehicles), agreeing that it's simply crazy that we don't have a fleet of them in our little town.

"They only go 35 miles an hour, but heck, that's my usual speed around here anyway!"

"See you sometime at yoga!" He calls out the window, cigarette inching out of his shirt pocket.

"Yeah, and I'll bring you some non-wheat, non-sweetened something or another!"